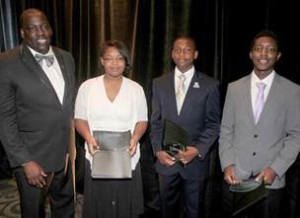 For two consecutive days, 17 HSCC teams were engaged in an intense competition consisting of oral, written and programming requirements in which each team had to give a presentation to the judges within a limited time. The Greater Columbia HSCC team did a phenomenal job with just 3 team members when the majority of the remaining 16 teams consisted of 5 members.

Congratulations to Michael Friday of Blue Cross and Blue Shield of SC for receiving an Individual Epsilon Award for Community Service.

Former Secretary of State Colin Powell was the featured Town Hall speaker on Wednesday at the 37th National BDPA Conference, which was also a highlight for the students.

The BDPA National High School Computer Competition, (HSCC), was founded in 1986 by Dr. Jesse Bemley, of Washington, D.C. What started as a two-team event between Washington, D.C. and Atlanta, Ga. has grown to over 20 teams of various high school students from chapters throughout the nation. It’s all designed to introduce our Youth to the field of Information Technology, encourage them to seek higher levels of education, and groom many of them to become our next generation of IT professionals. BDPA chapters across the country offer website and database design classes to middle and high-school students. In addition to technical subjects, students are also exposed to soft skills training, current technology topics and speakers from various professions. BDPA (Black Data Processing Associates) is an internationally recognized organization of IT professionals whose goals include preparing young people who are interested in becoming the next generation of ‘Information Technology Thought Leaders’ in academia and corporate America. The regional and national HSCC competitions are part of the BDPA science, technology, engineering, art and mathematics (STEAM) pipeline summarized in its motto, ‘From the Classroom to the Boardroom’.