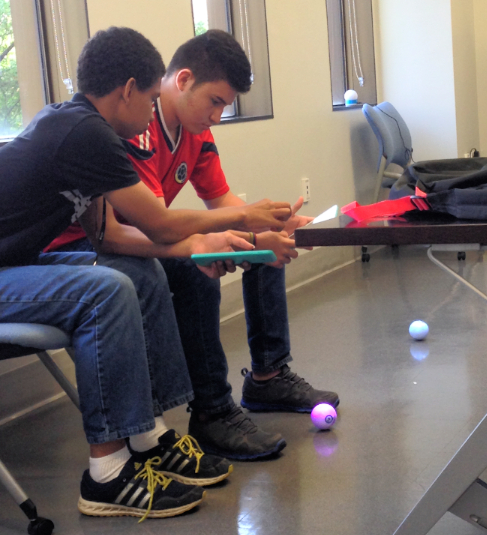 On June 16-18, we hosted students from the Carolina Alliance for Technology.  As our President Lonnie Emard said, these kids are future IT stars.  The camp, which took place in our Portal, focused on different aspects of robotics.  The intimate setting, only about 10 students, allowed for the students to work as a whole, or break off into small groups.

On the first day, campers broke-down robots and built them back up.  On day two, the students learned about programming small, spherical robots, aptly named Spheros.  The robots were rolling all over the office!  The final day of camp enabled students to practice programming servos, the small motors allowing robots to move.  The motors, together with 3D-printed gears and a variety of craft supplies, were used by the students to build their own robots.  For being made out of materials like cardboard, styrofoam and pipe-cleaners, these robots sure were impressive.

We were able to watch students Anthony Martin, Justin Wright and Tyler Mack work as a team to build their robot.  Inspired by the garbage-eating robot in a book they were given, their robot had moving cardboard arms and working multi-colored lights.  Impressive stuff for an hour of teamwork!

We were also on hand this past weekend at the Cyber Security Workshop hosted by Allen University.  The group of students, made up of nearly 30 young men and women, were treated to the knowledge of cyber security professionals.  Thank you to Allen University for hosting us at this event.

Now it’s all eyes looking ahead to our next summer camps, 3D printing and robotics.  Check back to our August update to find out what we learned at those camps!